‘My Future, My Midwife’: NMC launches its new Future Midwifery Standards in Cardiff

The Nursing and Midwifery Council (NMC) is launching its new Future Midwifery Standards, setting out what the next generation of midwives will know and learn, in Cardiff today.

As the International Year of the Nurse and Midwife begins, the celebratory event, held at Cornerstone in Cardiff, is the culmination of two years of work engaging with women, midwives, student midwives and other health professionals to transform midwifery care for everyone.

The standards set an evidence-based benchmark for the profession, creating a foundation for midwives of the future to receive a first-class education and reflect the transforming health and care world in which midwives work.

They place an increased focus on continuity of care and the importance of midwives being a constant presence throughout a woman’s pregnancy, labour and beyond, ensuring their needs and preferences are met.

They also highlight the importance of ensuring midwives have the right knowledge and skills to identify the individual mental health needs of women as early as possible, as well as the importance of working in collaboration with multidisciplinary teams to provide evidence-based, compassionate and appropriate person-centred care.

Ahead of the event, local mum, Elisia Rogers, shared her personal experience of outstanding midwifery care at the Royal Gwent Hospital, when she went into labour last Christmas Day.

Elisia had discovered her baby was breech (where the baby is bottom first instead of head first) but knew her preference was to try for a vaginal birth.

“When my waters went on Christmas morning, I was a little worried about who would be working and whether they’d be able to support a breech birth.

"But from the moment I arrived in both the birth centre and the labour ward, everyone, the midwives and doctors, were just so enthusiastic about breech birth and supporting me.”

On shift in the labour ward that day were midwives Jane Morgan and Amanda Graham. Jane, a midwife for 29 years, had experience supporting breech births, while for Amanda, 2 years qualified, this would be her first time supporting a full-term breech birth. Both had recently undertaken additional breech birth training.

“Elisia’s birth plan and preferences had been shared with us and we were committed to supporting her fully in her choice. I think that really helped us to build trust quickly, because she knew we understood what she wanted and so she could focus on the important work of birthing her baby.”

Because Elisia’s baby was breech, the birth meant that doctors also needed to be involved in her care.

“We were lucky to be supported by a registrar who had attended many breech births before, and so felt at ease with it and recognised that midwives were the appropriate people to lead the birth.

“In fact, we used some new techniques we had learned in our course during the delivery, which the doctor had never seen before. The registrar said she was so impressed and would definitely be using them in future breech births she supported."

“My birth experience has made me even more passionate about continuing my studies to become a midwife. I think all women to deserve to have the kind of care I received - where their choices, hopes and fears are listened to and where they can work together with their midwives to achieve an empowering birth.

“I want to help remove the fear around childbirth and educate women that they have choices when it comes to how they birth.”

“Elisia’s story shows how important it is for midwives to listen, build trusting relationships and work in partnership with the women they care for.

“It’s also a prime example of how midwifery led care, with the knowledge and expertise that comes from that, can be a vital source of information for other colleagues in an interdisciplinary team. And in Elisia’s case, it enabled a level of teamwork that supported her with the best and safest care, resulting in the birth she wanted.”

“I am delighted to welcome the NMC to Wales today to launch the new future midwife education standards. These standards will further support the role of midwives both here and across the UK to provide safe, effective, family centred care during pregnancy, birth and in the postnatal period.

“Midwives in Wales are committed to working with partners to deliver a future Maternity Vision for Welsh families. These education standards provide the framework to support the training in equipping and empowering midwives to enter this new phase of maternity care.”

Helen Rogers, Director for Wales at the Royal College of Midwives, said:

“Putting women at the centre of their own maternity care is crucial. Midwives work hard to advise and support women with information throughout their pregnancy, which enables them make informed choices about the care that is best for them.

“Elisa’s pregnancy story is a wonderful example of excellent multi-disciplinary maternity teamwork and continuity of carer, that combined, does enable midwives to deliver safe, high-quality care.”

See a photo of Elisia Rogers, 25, and partner Stephen with their son Tedi shortly after his birth: 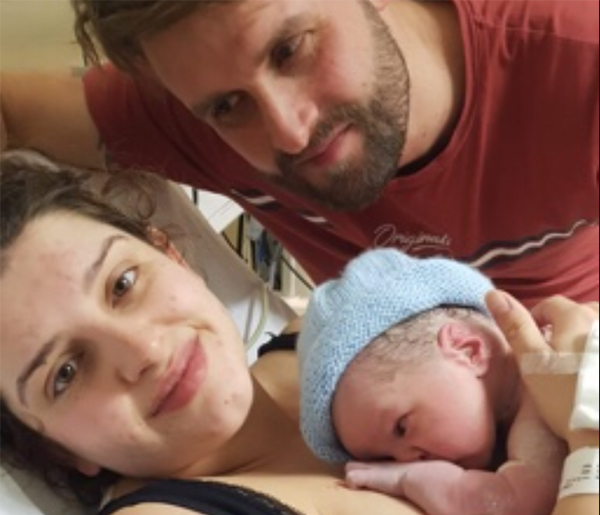