In her regular blog, our Chief Executive, Andrea Sutcliffe, reflects on listening and responding to the voice of people involved in our procedures 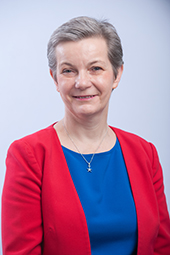 Last week I met Sarah, a young woman whose baby boy died in 2017. At the beginning of 2018, she referred the midwife involved in their care to the NMC. We were not meeting to discuss this case, which is ongoing. We were meeting so Sarah could explain to me her frustrating and distressing experience of dealing with the NMC and our Fitness to Practise process.

I very much regret that the way we initially responded to Sarah compounded her distress. Some of that is the fault of our process but more fundamentally it is about the way we behaved as an organisation – lots of different people to talk to; promised phone calls not made; emails not answered promptly; all leaving Sarah with a lot of chasing to do. I could feel Sarah's pain when she said it was only after six months that someone from the NMC said "I'm sorry you lost your baby."

Fortunately Sarah is feeling much better supported by us now as she is in contact with the newly established Public Support Service. She also saw that the NMC staff she had encountered were not deliberately trying to upset her. But like so many people raising concerns about services and organisations in the health and social care world, her intention in talking to me was to make sure no-one else has the same experience.

Sarah had some simple solutions to make things better.

First – treat people with compassion, walk in their shoes, and understand their situation. Sarah had produced two great diagrams – the first showing a woman screaming with frustration in the middle of all of the job titles of the people she had to deal with at the NMC. That was bewildering enough, but then the second diagram showed that not only was Sarah having to cope with all of us, there were dozens of people from other organisations, her own work and of course her family including three lovely daughters. As someone who wasn't lucky enough to have children, I am always in awe of the juggling act parents have to pull off, but this was an extreme version of everyone else's juggling act. Sarah felt we didn't understand this and didn't treat her as someone who had all of these other responsibilities and demands on her time.

There are many other aspects of Sarah's focus on compassion, but they all feed into her second point which is about communication. Navigating our Fitness to Practise procedure is not easy but making sure we communicate well can help alleviate the uncertainty it creates. Sadly we did not cover ourselves in glory on this either but the single point of contact we have now established through the Public Support Service is going some way to improve things.

One of Sarah's comments that struck me deeply was that we kept on telling her we needed to be fair to the registrant involved – she asked, not unreasonably "what about being fair to me?"

I had cause to reflect on that more following the Westminster Health Forum Professional Regulation event the following day. Regulators, doctors, lawyers and academics were speaking about professional regulation and possible reform. There were heartfelt pleas, particularly from Dr Jenny Vaughan and Dr Matthew Tuck, for registrants involved in Fitness to Practise procedures to be treated fairly and with compassion. This is something we agree with at the NMC. As well as ensuring people using services, patients and their families are at the heart of all we do, our new Fitness to Practise approach is designed to be more mindful of the impact of our processes on registrants. We have more to do to ensure our intentions are made real but the commitment to improve is there.

Sadly the voice of people using services was not directly represented by anyone on the platform. I was proud of our Director of Fitness to Practise Matthew McClelland who changed his presentation on the spot to try and redress the balance by reading out an anonymised telephone note of someone calling to talk about the progress of the investigation into concerns about her mother's death. Like Sarah’s story, it revealed the complexity of the people and organisations involved and the impact on her.

It’s important for professionals affected by regulation to have a voice and for that voice to be listened to. It’s equally important for the public and people affected by poor care to have a voice too and for that voice to carry weight. If we don't recognise both perspectives then it may feel that treating people fairly and with compassion is an either/or debate - it's either the nurse, midwife, doctor or the individual affected. That doesn't help anyone. When we talk, as I think we should, about the human impact of regulation, then we need to include both the public and professionals affected and consider how we make sure everyone feels they are being treated with dignity and respect.

Sarah played me a short video message from her daughters. They asked that we should be kind to people who have lost their babies. They’re right. Kindness should be at the heart of our human approach to regulation and I am convinced that my colleagues at the NMC share my determination to do just that. Thank you Sarah so much for talking to me.

05.07.21 Blog: #FutureCommunityNurse: making the most of this opportunity

Our Chief Executive and Registrar, Andrea Sutcliffe, explains why your involvement in our consultation on draft standards for community and public health nursin

02.06.21 Blog: What we’re doing to improve how we regulate, for the benefit of the people we serve

In her latest blog, Andrea Sutcliffe, our Chief Executive and Registrar, explains what we’re doing to improve how we regulate, for the benefit of the people we

Our Executive Director of Strategy and Insight, Matthew McClelland, explains why the Government's proposed changes to our legislative framework will allow us to