In her latest blog, our Chief Executive, Andrea Sutcliffe, reflects on a month of events celebrating Black History Month

We’ve had a memorable Black History Month, full of inspiration, tributes and challenge.

New history was made – Dina Asher-Smith becoming the first British woman to win a sprint Gold at the Athletics World Championships started October with a bang!

Icons were honoured – my personal favourite being the lifetime achievement Pride of Britain Award for Professor Dame Elizabeth Anionwu. Elizabeth was the UK’s first sickle cell nurse specialist and her distinguished, pioneering career is an inspiration.

Debates were generated – one being the media treatment of the Duchess of Sussex culminating in a letter from women MP's calling out “the outdated, colonial undertones to some of these stories.” If someone in such a privileged position as the wife of the monarch’s grandson faces such difficulties, what chance do others have?

At the NMC our Cultural Network, led by Rebekkah Isaacs and Mbonisi Dube, organised an amazing array of events ranging from film nights to fashion shows and cook-offs with a good sprinkling of serious debates in between, ending with a fascinating conversation with the creator, script consultant and leading actor of Top Boy. Colleagues from our LGBT+ network shared stories throughout the month of influential black members of the LGBT community including Bayard Rustin and Stormé Delarverie. We’ve certainly been entertained, informed and challenged. 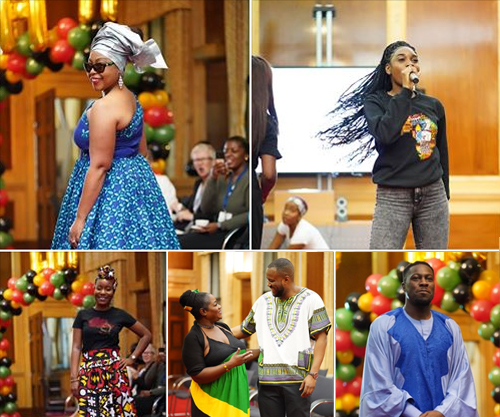 But as one of my colleagues memorably said, she doesn’t stop being black once October ends, she’s black every day of the year. If our awareness of discrimination; understanding of prejudice and privilege; and commitment to creating an inclusive and positive environment for all ends at Halloween, then we will have failed.

There’s two specific aspects I want to focus on - one is the racist abuse of health and care staff; the other is leadership at the NMC.

As October ended, the reality of the racist abuse suffered by our Black, Asian and Minority Ethnic colleagues was thrown into sharp relief with this heart-breaking, shameful interview with an Indian doctor who was told by a patient that she wanted a white doctor and the subsequent sharing of similar stories on social media.

While some reacted with surprise and horror, such stories are not news to thousands of people working in health and social care. They’ve been putting up with this for years “taking it on the chin”, not expecting and often not getting an institutional response or support. One of the worst aspects of the doctor’s interview was that he did not know how his organisation would react.

Another story shared with me made me think deeply about the role of the NMC and professional regulation. A white woman being cared for by a black midwife said she didn’t want “that type of woman looking after her”.  The midwife felt vulnerable and defensive of her practice and feared “losing her pin”. Her manager organised for another midwife to take over.

It’s dreadful to think that people on the NMC register who are from an ethnic minority background could believe we would focus on the mistake, not take a stand against the racism that preceded it. Our own statistics show that people from Black Asian and Minority Ethnic backgrounds are disproportionately referred into our fitness to practise procedures by employers.

This isn’t just an issue for nurses and midwives.  The General Medical Council commissioned Dr Doyin Atewologun and Roger Kline to investigate the reasons for the disproportionate referral of Black Asian and Minority Ethnic doctors into GMC fitness to practise procedures. Their report Fair to Refer provides hugely valuable insight, not just for the regulation of doctors but for employers and regulation more widely. As I said when the report was published we need to support employers to deal with issues quickly and effectively, taking better account of the context in which mistakes happen. This has got to include whether colleagues have experienced racial abuse.

We are conducting our own further research into how registrants with protected characteristics experience NMC processes and are determined to make a difference in our practice but also to influence others at a local level.

While it’s important that the NMC and other professional regulators provide leadership in this area – to do that we have to recognise our own limitations and challenges. This point was reinforced for me at the Black History Month session we had on leadership. We were privileged to hear from a stellar panel:

Each brought their personal experience and insight from years of making a difference as black leaders in different fields. They were wise, funny and inspirational.

Towards the end of the session Anthony asked our Chair, Philip Graf, to stand up; then he asked me to stand up; then he asked any other members of the Executive team there to stand up and three of my colleagues duly obliged. As we stood up, the point was blindingly obvious – in a session about black leadership, we are all white. But Anthony was typically generous. He acknowledged that the NMC has a way to go to be truly inclusive at all levels of the organisation but said it was good we were there, listening, seeking to understand and wanting to take action and that gave him hope for the future.

05.07.21 Blog: #FutureCommunityNurse: making the most of this opportunity

Our Chief Executive and Registrar, Andrea Sutcliffe, explains why your involvement in our consultation on draft standards for community and public health nursin

02.06.21 Blog: What we’re doing to improve how we regulate, for the benefit of the people we serve

In her latest blog, Andrea Sutcliffe, our Chief Executive and Registrar, explains what we’re doing to improve how we regulate, for the benefit of the people we

Our Executive Director of Strategy and Insight, Matthew McClelland, explains why the Government's proposed changes to our legislative framework will allow us to