Blog: "Don’t let being a bloke be too big a part of your narrative"

Dilan Chauhan wanted to be a car dealer, a chef or a fashion designer – but never expected he’d end up being a midwife. 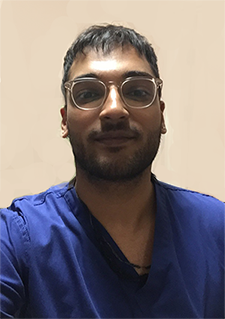 The 23-year-old was leafing through a university prospectus with his mum when he was 15 and joked about becoming a midwife.

“My mum didn’t understand why it was funny,” says Dilan, who now works as a midwife at University Hospital Lewisham.

“She thought it was the perfect role for me.”

His teachers had encouraged him to do a degree in law or English Literature, but he knew that wasn’t his calling.

It was one of his teacher’s relatives, who was a ward manager nurse, who piqued his interest in health and care.

He started volunteering at a Birmingham Women’s Hospital post-natal ward and enjoyed the buzz the job gave him.

His job was to ask patients about their experiences and guide them to fill out questionnaires.

“Anyone would have found it challenging not to be moved by people pouring their heart out to you.”

Dilan continued working at the ward during his sixth form years, and despite his teachers trying to deter him from a career as a midwife, he never relented.

But when he started getting rejections from the universities he’d applied for, he began to wonder whether he’d made the right choice.

“I thought – maybe this whole thing is silly. I thought they’d have to consider the fact that I’m a bloke. I didn’t martyr myself over it.”

His worry turned to excitement when he was eventually offered a place at Kings College – which had happened to be his first choice.

“It was quite intimidating but everyone was lovely to me.”

During his placement at Lewisham Hospital he was assigned a midwife as a mentor, who became an instrumental part of his early career.

But he admits he wasn’t prepared for women who refused to have a male midwife present at the birth of their baby.

“I’d be lying if I said I wasn’t upset at first” he says “but it was all part of the learning curve.

“I’m there to respect people’s wishes and I’ve got to empower them in their choices.

“There was a moment where I wondered if I’d ever get enough births to pass my course.”

But, luckily, most women were happy to have Dilan as their midwife and he passed his course. He has now been qualified for a year and has some strong advice for any men looking into doing a midwifery course.

“Don’t let being a bloke be too big a part of your narrative. Being a midwife is the single best decision of my life.

"Yes, it presents itself with a lot of obstacles, but it’s very rewarding too.”

Read the latest blog from our Chief Executive Andrea Sutcliffe

In her latest blog, Andrea shares a personal story highlighting the importance of nurses across the country and celebrates their incredible dedication, especial

A message from Andrea on the national minutes silence.