For Stacey Finlay, the acting sister of a care home in Belfast, the best part about being a nurse is the way she bonds with patients. 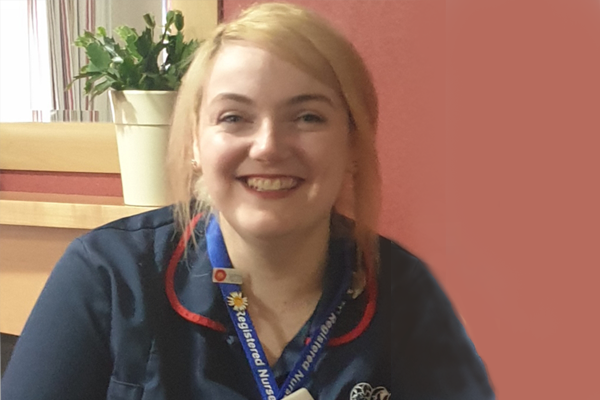 “It’s all about being human and humane and kind and courageous. It’s about helping people.  Letting them know, 'We’re always there for you'."

Stacey's only been registered as a nurse for two years, but already she’s seen the impact she can make in a person’s final days.

Her proudest – but most difficult – moment happened when she was just four months into her career, in January 2018.

She was looking after a patient named Gill* who was in her 90s, struggling to breathe and had several long-term conditions. If she was to survive she would need intensive care treatment, but Gill had made her wishes very clear: she didn’t want aggressive treatment under any circumstances.

Stacey called the doctor who agreed a transfer to the ICU wasn’t in her best interests, and as he was away from the unit, asked that she speak to Gill’s family.

“I called Gill’s daughter and asked if she could come to the unit to discuss her mother’s care. As soon as I put the phone down the reality of the call I’d made began to hit me.

“My mind was whirring with the realisation that this family was going to arrive any minute now, and I had to talk to them about one of the worst things that can happen to a person: the loss of their mother.

“I was with another patient when the nurse in charge came to tell me Gill’s family had arrived and were waiting for me in a private room. I said ok, and took a deep breath.

“The nurse in charge offered to join me – I don’t think I’ve ever agreed to something so quickly.”

Calmly, she explained that Gill’s condition had deteriorated and at this stage it was very likely she wouldn’t survive.

Her daughter nodded. She said she ‘had a feeling’ this might happen. Stacey explained what would happen next, that the doctor would prescribe medicines to keep her comfortable and her care would focus on her comfort.

“I suggested that the family join Gill. Gill’s daughter hesitated, explaining that she was getting over a cold. ‘Would this make mum worse?’ she'd asked.

“I looked to the nurse in charge for assurance, and explained that at this stage it probably wouldn’t make a difference. The benefit Gill would gain from having her there would far outweigh the risk. Not to mention the benefits her daughter would get.”

The family went to join Gill, and the nurse in charge and Stacey back to the work of the ward, serving the evening meal.

It wasn’t until the nurse in charge patted her on the back and said ‘you handled that really well, you should be proud of yourself’ that all the emotion of the past few hours flooded out. She was set off the unit for an emergency cup of tea.

When Stacey came back, the doctor had arrived. He and Stacey spoke to Gill’s family again.

“At the end of the discussion Gill’s daughter shook the doctor’s hand, and I stretched out her hand out for a handshake too. But Gill’s daughter turned to me and gave me a hug, thanking me for the care I’d given her mum.

“The next day was my last day on the unit for a while. The last thing I did that day was help another nurse to move Gill and give her incontinence care. Gill was afraid of turning in the bed for care like this, so we had started to ask her to ‘give me a hug’ instead of saying ‘turn to me’. It didn't change the procedure but it made her feel safer.”

Gill was giving Stacey ‘a hug’ when Stacey heard her say something about her family. Stacey reassured her patient, telling her that her family were just behind the door.

But the next words were a massive surprise.

“She stroked my arm, looked at me in the eye and said, ‘no, you’re like family.’ Those were the last words she said to me.”

Thinking about it makes Stacey tear up – but also reminds her of the reason she’s proud to be a nurse, and the difference she made to Gill and her family.

“We step into people’s lives and make a difference every day. We’re the people who are there as life begins, as life ends, and for everything else in between.

“We’ve worked hard to get here, and the hard work doesn’t stop. But the payoff is spectacular and the good outweighs the bad.”