Your stories of nursing

Maxwell Oosman reflects on overcoming barriers as a male nurse and the passion that made him come out of retirement. 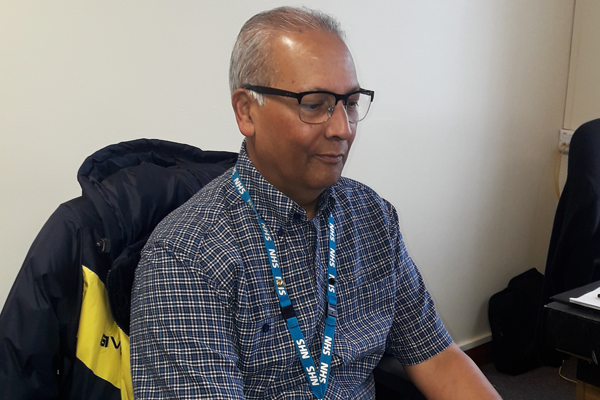 Maxwell Oosman grew up in 1960s Mauritius, desperate to be a nurse. But, according to him, back then it was a country built on ‘white privilege’ and there weren’t many opportunities for people like him.

“Growing up, I felt like I was on the other side of the looking glass,” he said. “I was a brown boy in a white world. I couldn’t get the same privileges white people did.”

But when the country gained independence and joined the Commonwealth in 1968, bright-eyed Maxwell jumped at the chance to head to England to pursue his dream.

“When I came to England I saw things I never thought I would experience. I was suddenly part of this big wide world with a newfound freedom.”

As he started his nursing course in North Staffordshire Hospital in 1972 as one of two men on a course full of local women, he realised he still had barriers to overcome.

He recalls how he was told “you’ll only be considered for jobs if nobody else wants them,” by the matron of the hospital he was hoping to work at.

“That level of discrimination stays with you for life,” he says. “I still find it hard to think about it sometimes.

“I was given the jobs nobody wanted. I wanted to work in A&E but I was put in a back ward nobody was on.”

Still, the day he got his PIN badge in 1975 was a landmark moment and he soon moved to Epsom Hospital in Surrey to work on a mental health ward.

He admits that before he qualified, there were moments where he had doubts about his future.

“It took me a while to understand what nursing was about and the value we put on it,” he says.

He now wants to use his experiences to be a role model for the next generation of male nurses, particularly those from ethnic minorities.

While he is pleased people’s perceptions are shifting, he knows we aren’t quite there yet.

“My granddaughter asked me how I could be a nurse if I was a man? I had to explain it to her.”

He is an ambassador for campaign Nursing Now, a global movement which goes into schools to try and reduce the gender gap in the profession.

His passion for this is so strong that he came out of retirement after only two months at the age of 65.

Now, he works for the memory assessment service for Lancashire Care Community Foundation Trust in Burnley, where he diagnoses patients with Alzheimer’s and helps them get the support they need.

He is also a special advisor for the CQC, speaks at conferences and has worked with NHS England and NHS Improvement to tell his story.

“To this day, the profession is more female dominated, but now I am in a place where I feel valued.

“There are so many stereotypes but my story is one of collective resilience.

“I’ve been through ups and downs, trauma and depression and I was quite disillusioned – but I am strong now and I want to be a ‘change agent’ to inspire others.

“Some people have the perception that nurses are the handmaid of the doctor, but far from it. We are justified in being assertive, we are eloquent and articulate and we make a difference

“I love my job. Some people dread going to work at the start of the week but I have that Friday feeling every Monday morning.”