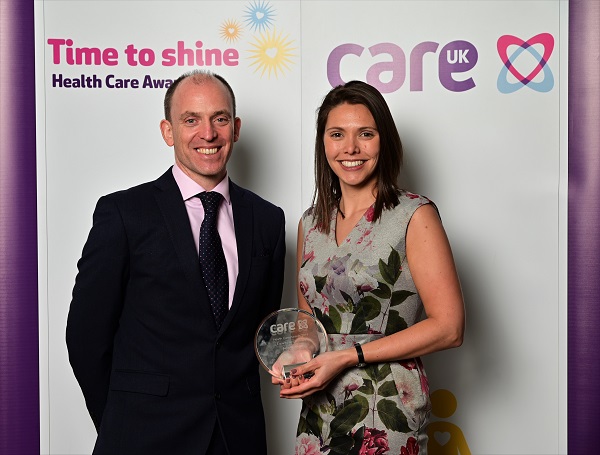 Julia Waldron left school at 16 to become a cadet nurse, but she knew she didn’t want to work in a hospital.

She went on to do her nursing Diploma in 2003 at the University of Nottingham and spent three years training at Lincoln County Hospital.

Reflecting on the moment she got her pin, she said:

“It was a nerve-wracking time as I had a huge sense of responsibility.

“I was 20 and looking back that feels so young. I can honestly say my nursing career didn’t start until after my PIN came as that’s when I learnt what being a nurse actually is.”

In those two years, she worked on a range of wards from urology to general surgery but despite being so early on in her career, she was desperate for a change.

“My grandma always told me I was caring and she could see me as a nurse so that stuck, but in those days I felt you were either a community nurse or a hospital nurse,” she says. “I didn’t know what I wanted.”

So when an opportunity to work at Morton Hall Women’s Prison in Lincoln came up, she took it and never looked back.

From there she moved onto Ranby Prison in Nottinghamshire and she worked her way up the ladder into a clinical lead post.

“Once I started working there I knew it was the place for me. I am so passionate about the diverse patient groups we look after.

“The thing I love most about it is the different specialisms we cover – from substance misuse to mental health problems.

“I have also worked with people with diseases, emergency care, palliative care and chronic management.”

Early on in her prison career she was responsible for looking after a patient who was receiving end of life care, having been diagnosed with terminal lung cancer.

She had a little boy who was living with her elderly mother abroad and so she had minimal contact with him.

“I co-ordinated her care and worked with our prison colleagues and the NHS and we arranged for her to be released on compassionate grounds.

“She spent two days with her son before she passed away. It’s very emotional, and is still emotional to think about it to this day.”

Speaking about her role, she said:

“I love being given the privilege and responsibility to help other people at their most vulnerable.

“In prison they don’t have their family for support when they need healthcare and that’s very isolating.”

She recently led a project supporting LGBT+ prisoners for embedding staff training and policies to support people facing difficulties over sexual orientation, gender dysphoria and transitioning. Her efforts saw her win an award from her employer, Care UK.

She also wants nurses of the future to know there are many different areas of nursing to pick from and they don’t have to be restricted to a hospital setting.

She also said nursing associates are becoming “more important than ever.”

“Nurses are becoming more advanced in clinical practice and end up doing work that would have previously been undertaken by doctors, which means nursing associates are more important than ever.

“They bridge the gap between advanced nurses and healthcare support workers.”