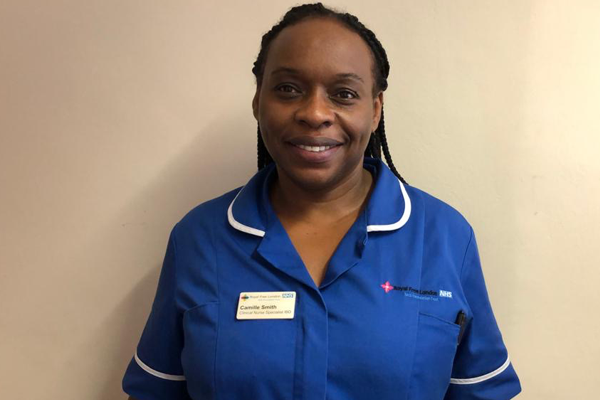 Camille Smith has treated hundreds of people over the years – but nothing could have prepared her for a conversation she recently had with a 90-year-old patient.

“I was one of the first black people she had ever interacted with,” says Camille, who works with patients who have inflammatory bowel disease at Barnet General Hospital.

“The woman was intelligent and friendly, and while she’d seen black people on the street, she had never interacted with a black person before. I was shocked.”

For Jamaican-born Camille, that story is a positive one about breaking down barriers because it was a chance to prove how easy it is to overcome our differences.

And as the Nursing and Midwifery Council (NMC) celebrates 100 years of regulation on December 23, Camille says the workforce really has come a long way since 1919.

But she still wants to see more ethnically diverse people representing nurses at a more senior level, a message that’s all the more pressing this Black History Month (October.)

“More people from ethnic minorities aren’t afraid of challenging racism when faced with it anymore, and we’re becoming bolder and braver.

“We’re on the right track – for instance interviewing panels are becoming more ethnically diverse – but there’s still a lot more work that needs to be done.

“For example, I don’t feel like we’re represented at board level and it’s important to have people to advocate for you.

“I’m also worried that a lot of people won’t go for jobs they think are out of their reach simply because of the colour of their skin.

“If you don’t get a job you think you were qualified for, there’s always that worry – was it because there was someone better, or was it because I am black?

“That upsets me because it should be about your capabilities, not about how you look.”

Camille, 47, has never experienced any discrimination, but understands it’s a harsh reality for many nurses across the UK.

As a young girl in Jamaica, she always knew she wanted to be a nurse, but had to quit two years after starting her degree in the 1990s.

She decided to move to London for better opportunities, and found a well-paid, stable job working with people with learning disabilities – but couldn’t ignore her calling.

So in 2001, she gained a place to study adult nursing at Middlesex University, having to start her degree from scratch all over again.

When she finally received her PIN in 2005, she’d already received a job offer as a staff nurse in general medicine at Chase Farm Hospital.

“I jumped for joy – that was such a relief,” she said. “But the change from being a student nurse to a qualified nurse was quite a dramatic one.

“As a student I had the protection of my teachers and mentors, but suddenly I was out on my own so what if something went wrong?

“I quickly learnt to trust myself. I learnt a lot from the other nurses and was like a sponge, sucking up everything I could.”

She quickly rose through the ranks to senior sister, and in 2014, took on a role at Barnet General Hospital on a gastrointestinal ward.

Camille’s job as a clinical nurse specialist now sees her looking after people with Crohn’s Disease and Ulcerative Colitis, two conditions which affect the bowel.

“I find learning about the diseases very interesting,” she says. “People are very vulnerable, it’s a debilitating illness.

“Making a difference in someone else’s life is rewarding.

“I enjoy chatting to patients and helping them find ways they can manage their condition, as well as providing support.”

As the profession evolves, Camille says nursing regulation is as important today as it was 100 years ago.