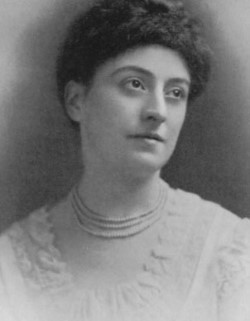 Ethel Gordon Fenwick, née Manson, was a former matron of St. Bartholomew’s Hospital in London who spent 30 years campaigning for the state registration of nurses.

Ethel’s tireless efforts resulted in the Nurses Registration Act 1919, which brought nurses together under one profession.

Her father, Dr Davidson Manson, died when she was a baby and three years later her mother, Harriette, married George Storar, a Member of Parliament for South Nottinghamshire. Mr Storar became the only father Ethel knew. Ethel grew up with culture, refinement and wealth.

A woman ahead of her time

A young woman with her advantages wouldn’t have been expected to work. But Ethel had intellect, determination and courage. She was a gifted public speaker and an articulate writer – in many ways, she was ahead of her time. She wanted to work, and she chose to dedicate her life to nursing.

In 1878, a 21-year-old Ethel started training as a paying probationer at the Children’s Hospital in Nottingham. After a year, she moved to the Manchester Royal Infirmary, before earning a promotion to sister at the London Hospital in Whitechapel. She passed hospital inspections with flying colours. Her wards were organised, efficient and clean. Patients appeared cared for and respected.

Rising through the ranks

During her six years as matron, Ethel extended training for nurses at St Bartholomew’s from two years to three, and ensured they also had theoretical instruction, as part of her drive to improve nursing standards. She sought better protection for nurses and their professional status, so patients knew that anyone calling themselves a nurse met consistent training standards.

These early achievements signalled Ethel’s commitment to the professionalisation of nursing. She passionately believed nurses weren’t just doctors’ servants – they had their own unique set of professional skills and Ethel wanted this to be recognised.

Ethel married Dr Bedford Fenwick in 1887 and they had a son, Christian Bedford Fenwick, in 1888. It was an age when women could have a family or a career but not both, so Ethel had to resign from her position as matron at St. Bartholomew’s.

But crucially, Ethel didn’t give up on nursing. She was still concerned by varying training standards and passionately believed that nurses should be brought together under one profession. That’s why Ethel began what would become a 30-year campaign for the state registration of nurses.

In 1888, Ethel founded the British Nurses’ Association, with her husband, Dr Fenwick, as its president, to further the cause for registration.

Five years later it was granted a Royal Charter and became the Royal British Nurses’ Association (RBNA) in 1893. Ethel and Dr Fenwick also took over The Nursing Record, a publication advocating nurse registration and women’s rights, including the right to vote – Ethel was an ardent suffragette.

Not everyone supported Ethel’s ambition for nurses to be registered.

Nursing created opportunities for women of various social classes, but care for the wealthy often took place in their homes, while hospitals cared mostly for the poor and soldiers during wartime. There were conflicting opinions about the value of nurses and their ability to offer care.

During Ethel’s tenure the RBNA was restricted to keeping a list, rather than a register, of nurses. And the RBNA board banned founding members from serving on Council, effectively ousting the Fenwicks from the very from organisation they started.

Ethel was undeterred. She re-emerged in 1894 with the Matron’s Council of Great Britain and Ireland, an organisation she founded with her friend and successor at St Bartholomew’s, Isla Stewart. Ethel was also elected as president of the International Council of Nurses (ICN) in 1899.

Ethel believed that strength in numbers would help her to lobby for nurse registration, so she launched the Society for the Registration of Nurses in 1902.

Working with Dr Fenwick, she also drafted the first bill for nurse regulation. Opponents responded with what became an unsuccessful counter-bill, but the strength of feeling about nursing registration – on both sides of the argument –  and wider political events of the time led to government inertia on the issue.

In 1904, Ethel founded the National Council of Nurses of Great Britain and Ireland to advocate for registration at the international level.

The Nurses Registration Act is passed

It still took many more years of steadfast determination, organising and lobbying before the Nurses Registration Act was finally passed on 23 December 1919. Ethel, then aged 62, watched it happen from the public gallery in the House of Commons. Fittingly, her name was the first to join the register, and she is still remembered as State Registered Nurse No. 1.

Even after the 1919 Act was passed, Ethel kept driving the professionalisation of nursing. Four years before her death aged 90, in March 1947, she was campaigning for standardised training for nurses, a single entry method to nursing as a career, and eliminating the two-tier (paying vs non-paying probationer) route for a nursing career.

A curious mind, a fierce debater and uncompromising in her beliefs. She left an enduring legacy.

Ethel Gordon Fenwick, S.R.N.: A short outline of her life and work. 1947. London: The British Journal of Nursing: incorporated with The Nursing Record. No. 2145, Vol. 95.

History of Nursing, 2014. The Nursing Times.

The Battle for the Bill. 2014. The Independent Nurse