Revised Code for nurses and midwives

The Nursing and Midwifery Council (NMC) has today published a revised Code which places public expectations at the heart of good nursing and midwifery practice. 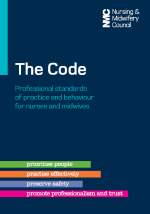 The Code will be sent to all nurses and midwives before it becomes effective on 31 March 2015.

Jackie Smith, Chief Executive and Registrar of the NMC, said:

“The Code sets out the professional standards for nurses and midwives. When someone joins the NMC’s register, they are committing to uphold these standards when they practice.”

“The Code will strike a chord with the nurses and midwives who already demonstrate these principles in their practice. It will put patients at the heart of practice, and will help us to protect the public better.”

The revised Code builds on the content of the current version, which was published in 2008. Jackie Smith continued:

“Public expectations of care have changed radically since the Code was last reviewed in 2008. It is essential that the Code reflects patients’ needs, modern healthcare practice, and the recommendations of reviews such as the Francis Inquiry.”

The Code will be central to revalidation, which is a series of three-yearly checks that the NMC is introducing at the end of 2015.

Geraldine Walters, Director of Education, Standards and Policy gives the latest on our education programme