Our overseas registration portal will be unavailable from 16:30 on Friday 26 February to 08:00 on 27 February while we carry out essential maintenance.

You may experience some disruption to our other online services during this time. We apologise for any inconvenience this may cause. 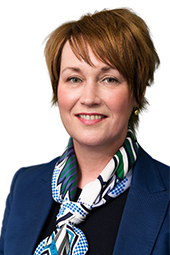 Ann was appointed permanently to the CNO’s team in September 2012 as Chief Midwifery Advisor and is also Associate CNO. Ann has significant experience in professional regulation, having been Local Supervising Authority Midwifery Officer for six years and also serving two terms as a member of the NMC’s Midwifery Committee.

As a qualified nurse and midwife, Ann practised in Glasgow and worked at a senior level in midwifery in a variety of units. In 2000, Ann was appointed Scotland’s first consultant midwife, working across NHS Greater Glasgow and Clyde in that role for over 10 years. During that time, she led key maternity strategies including public health, normality and various service redesigns. She also worked part time with the Scottish Government Health Directorates supporting midwifery and maternity policy within the CNO team.